Pat would often be found sitting in his lake-view rocking chair admiring the beauty of the water and thinking deeply about his life and family. It is to this backdrop that he often shared his life’s stories.

We’d love to capture your favorite memories, photos, and lessons from Pat. Navigate down below and join the chat with comment.

Check the tributes below


We’d love to capture more of your special memories with Pat. Tell us about some of the memories you have with him!

Do you have old photos of the racing days or memories you shared with him? Add them below by commenting and attaching a picture.

Pat wasn’t short of life’s accomplishments. What was your favorite advice he gave you? What saying stands out to you the most?

Here’s an example tribute! You can add a lesson, photo, or favorite memory! 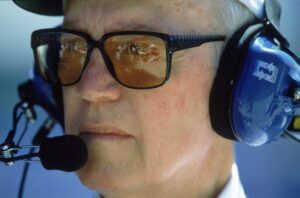 “Pat Patrick…what can I say; friend, boss, race team owner, the guy that signed my checks in the early CART days. But the biggest thing that renders in my mind is his love for his family. They always came first for Pat. I always enjoyed race days; being in the Patrick Pit as an official. You had to be on your toes and always ready especially when he leaned his head forward and looked over the top of his glasses for answers when it was not going his way; the right way. He expected answers that would put the team out in front. You learned fast he was testing you. To make sure you did your job. He was tough, serious and competitive; all at the same time while being the most caring guy. PRAYERS to the Patrick family. RIP Mr Patrick. You will be missed.”

“My Thoughts and Prayers are with Pat and the entire Patrick Family! May Pat forever Rest in Peace!”

God bless you all in the wake of Pat’s passing. I’m writing in the light of fond memories of the years I lived and worked with Fr. Coyle. The Catholic community of Jackson remains deeply grateful for Pat’s great generosity with Lumen Christi High School. The school is going strong and now includes 7th and 8th graders.
What a life and legacy to celebrate. I’ll remember Pat with a Mass in the weeks ahead. God bless him and all of you, his dear family.
Fr. Tom Helfrich, OSFS
Pastor, St. Rita, Clarklake MI

Sherry,
My Thoughts and Prayers are with Pat, You and the entire Patrick Family! When and where will this Obituary be posted and will there be an area for people to send Flowers or Donations or a written Tribute? I have been asked by several of His
Friends and I will gladly pass along this information.

Pat Patrick, one of the most influential car owners in Indianapolis Motor Speedway history, passed away on Tuesday in Phoenix at at the age of 91.
Patrick’s teams won the Indianapolis 500 three times, including the rain-shortened race in 1973 with Gordon Johncock and then near photo finish in 1982, where Johncock edged Rick Mears, and again in 1989 with Emerson Fittipaldi. But his legacy will likely be as one of the founding fathers of Championship Auto Racing Teams. Together with Roger Penske, he started CART in 1979 and wrestled control of Indy car racing away from the United States Auto Club by 1982.
“Pat was a very sharp businessman and very good at looking down the road and he could see USAC was going nowhere so he and Roger started CART,” said Jim McGee, who worked as team manager for Patrick Racing in three different decades from the 1980s to 2000s. “He was a wildcatter and took a lot of chances but he was always very determined to make something work and he was proud of what CART accomplished.
“He liked racing because it was a challenge.”
A native of Kentucky who migrated to Michigan, Patrick was in the oil business with Walt Michener when Michener began fielding Indy cars in the late 1960s sponsored by his partner. In 1970, Patrick Racing was formed and Johnny Rutherford damn near stole the pole position in an old, modified Eagle.
“That was a great way for Pat to get started but it didn’t look it the day before qualifying,” said Rutherford, who drove for Patrick in 1970 and 1971 and again in 1983. “We were only running 161mph and then my chief Mike Devin made a change to the front spoiler and we gained almost 10mph.
“Al Unser beat me by fraction (0.01 seconds) for the pole but Patrick Racing was suddenly on the map.”
Patrick Petroleum was a solid business unlike USAC championship racing in the ’70s and when fellow car owner Dan Gurney penned the White Paper and questioned where the sport was heading, Patrick and Penske put down their own money to start a separate CART series in ’79. USAC tried to ban their teams (along with four others) from competing at Indianapolis that year before a federal court judge ruled in their favor. “All the money Roger and I have spent fielding cars at Indy and they want to keep us out?” said Patrick after the trial. “That’s what I call bad business.”

Gordon Johncock’s victory for Patrick Racing in 1982 with this Wildcat Mk8B was the last Indianapolis 500 win for an American-made chassis. Motorsport Images
With Penske building his own cars to compete with Gurney’s Eagle, McLaren and other models, Patrick’s crew began building his own chassis in his westside Indianapolis shop. Its 1982 Wildcat was the last American-made chassis to win Indianapolis.
“Pat was a very loyal person and stuck with people and we had a helluva group in 1982,” said McGee.
While USAC continued to sanction the Indy 500, CART grew into a popular series with a major title sponsor, races all over the globe and gave road racing a renaissance in North Amerce.

Patrick’s team brought Firestone back to IndyCar racing in 1995 with driver Scott Pruett. Marshall Pruett archive
Patrick invested in what became known as the Indy Lights series in 1986 and that was a steppingstone for young drivers to move up to CART. He fielded cars at Indy from 1970-1995 and came back one last time in 2004. He ran two cars for much of CART’s 24 seasons, which ended in 2003. He was voted into the Motorsports Hall of Fame in 2018.
Pat Patrick is survived by three sons and one daughter.

CART TEAMS: Where are they now….

Welcome to the new and exciting inaugural CART Alumni feature page. What is it you ask? It is a page that will feature stories and bio’s of those teams, drivers and personnel that helped Championship Auto Racing Teams rise to become the leader in open wheel racing on a global basis. So sit back and enjoy interesting stories that you may or may not have known about regarding those that formed and created Championship Auto Racing Teams.
In this inaugural feature, we will be taking a look back at the history of one of CART’S founding members, Pat Patrick Racing.

Ueal Eugene “Pat” Patrick was born March 10, 1929 in Kentucky and was relocated to Jackson Michigan at an early age. Patrick grew up poor and worked in the onion fields in South Michigan. After Patrick finished high school, and with no money for college, joined the United States Air Force because he knew that the G.I. Bill would help give young Patrick the opportunity to acquire the education he sought.
Patrick began a career in accounting, however, after graduating from Michigan State, the Spartan began selling oil-field exploration equipment. It wasn’t long after Patrick decided to try his own hand at drilling. At first Patrick drilled and drilled only to find nothing but dry holes. Eighteen dry holes in all. Without getting disappointed, Patrick drilled his nineteenth hole and found the reservoir of black gold he sought. From that point on Patrick couldn’t do wrong as he hit another and another. It was an exciting time for Patrick as he founded Patrick Petroleum and landed on the New York Stock Exchange.

Pat Patrick had an unusual introduction to motorsports. Somewhere along the line one of his sons was interested in racing sports cars. Like all drivers, he needed to pass a medical screen in order to acquire his racing license.
The doctor who did the screening discovered Patrick’s son had cancer. Being that it was caught in the early stages, he was completely cured of the Cancer. Patrick felt so indebted to motorsports for having saved his sons life that he also began a career in motorsports. During the late 1960’s things moved quickly for Patrick. In no time at all he went from a sponsor to a team co-owner and eventually a sole team owner.

Pat Patrick was one of the founding members of the then “REBEL” CART owners following Dan Gurney’s famous white letter. Patrick found much success in open wheel racing, having won the Indianapolis 500 in 1973 and 1982 with driver Gordon Johncock and again in 1989 with two time formula one champion Emerson Fittipaldi. Who can forget that 1982 battle between Gordon Johncock and Rick Mears driving a Penske car with only a handful of laps left to witness one of the greatest finishes in Indy 500 history? It was an amazing event.
But Patrick suffered through heart break as well. Namely the horrendous 1973 Indy 500 weekend. When his driver Swede Savage lost control of his car and endured a firey crash. Then crew member Armando Teran, running toward the accident, was hit by a safety vehicle going the wrong way on pit lane. Armando Teran died that day, Swede Savage died a month later in the hospital.
Pat Patrick wasn’t without innovation and working for the advancement of young drivers. Patrick saw there was a need for an organized path for up and coming drivers to prepare for Indycar racing, so Patrick launched the new Indy lite series.
Pat Patrick continued to field Indycars through 2004 when he put the team up for sale at seasons end.

Pat Patrick is one of the great founding members of CHAMPIONSHIP AUTO RACING TEAMS that truly helped our sport reach global success. Ueal Eugene Patrick was inducted into the Motorsports Hall of Fame in 2018. Today Patrick lives a quiet life away from the track in his home in Jackson Michigan, not far from those onion fields and in Phoenix Arizona.
​         Ray Dock 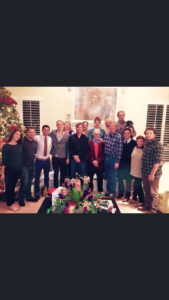